Nuevo Tango Doesn’t Exist, But it Sure is Taking up a Lot of Space on the Dance Floor 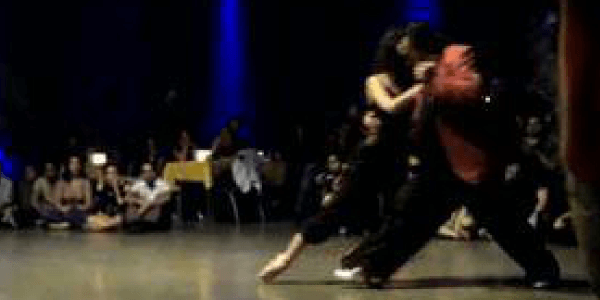 What is nuevo tango? And what’s all the controversy about? Here’s my best attempt to sort it out:

[Also see a more recent post, Nuevo Tango Reloaded. And a third resource, Tango Nuevo, a term coined by Petróleo in the 1940s…, my summary of Carolyn Merritt’s excellent dissertation on the subject. And do styles of tango exist at all?]

Starting in the 1950s, Tango composer Astor Piazzola started to break some tango rules, eventually leading to the incorporation of jazz and other elements into tango music. This activity was of course derided as non- or anti-tango, despite the reality that tango music and dancing had been always evolving since their first moments. By the 1970s, a number of other Buenos Aires tango musicians were also expanding the possibilities.

Changes in the dance came later. The wikipedia page on Nuevo Tango is getting better, although it is still incomplete. It now reads:

“Prior to the 1990s, Argentine Tango was taught with a didactic method; teaching tango by having students copy examples shown by the instructor. Emphasis was not given to how or why movement was done a certain way. Starting in the 1990s in Buenos Aires, the Tango Investigation Group (later transformed into the Cosmotango organization) founded by Gustavo Naveira and Fabian Salas applied the principles of dance kinesiology from modern dance to analyze the physics of movement in Argentine tango. Taking what they learned from this analysis they then began to explore all the possibilities of movement within the framework of Argentine Tango. From the work of these founders of the Tango Nuevo movement, there was shift in all styles of tango away from teaching what to dance toward teaching how to dance. Though widely referred to as a tango style outside of Argentina, Tango Nuevo is not considered a style of dancing tango by the founders of the movement. It refers only to the method of analysis and teaching developed through the application of the principles of dance kinesiology to Argentine Tango…Therefore, as Gustavo Naveira and the other founders of the Tango Nuevo movement have said, all styles of tango, which have now been influenced by the analysis of the dance, are all Tango Nuevo.”

In the early 2000s two practicas started in Buenos Aires which were spaces for Nuevo Tango, El Motivo in early 2004 in Club Villa Malcolm and then Practica X a few months later, which has moved several times over the years (reduced to monthly in 2010 and petering out in 2012). El Motivo describes their agenda as a tango space for young people, rather than any particular style of tango, and indeed a new generation of tanguera/os has emerged, although today one sees among the regular dancers at El Motivo lots of people their 50s (not so many in their 70s). The term ‘Nuevo Tango’ started to be used internationally by the mid-2000s, with a variety of significations being attached to it.

Critics of Nuevo Tango claim that the style of moving is disconnected, sacrifices the charms of close embrace, takes up too much space on the dance floor, and that the separation of the follower’s free leg from the dance floor (often described as “kicking”) poses an unsightly safety hazard to nearby dancers.

In 2006 and 2007, Dana Frìgoli popularized a new quality of motion for followers, characterized by increased strength and stretching through the follower’s body. This quality of motion seemed more appropriate to the powerful motion dynamics used by leaders, and is widely emulated today. Compare the motion of Naveira’s partner, Olga Besio, in 1999 with Dana in 2006.

By 2009, a reaction against Nuevo Tango took hold both in Buenos Aires and abroad, especially among dancers in their 20s. This reaction took several forms, the most significant is the recognition that Nuevo Tango had no new steps at all, and therefore could not be distinguished. By mid-2008, when I visited, few dancers in Buenos Aires were using Nuevo as an identity, although observers might describe their dance as distinct from a more traditional or older way of dancing tango. Another dimension of the reaction that I observed was the wholesale expungement by early 2010 of nuevo tango music from El Motivo, Practica X, and the playlists of young DJs in the US (this became apparent in the US in 2009). (In Europe, both alternative music and Nuevo Tango as a ‘style’ retained popularity.) A third dimension of the reaction is that between 2009 and 2010 in BsAs and the US, young dancers returned to a close embrace. These days in Buenos Aires, no one dances an entire song in open embrace. Even the dancers one would be tempted to describe as nuevo –if it existed– start the song in close embrace, and although they may open it, surely come back to it during the song.

Maestros famously associated with nuevo tango still draw big attendance in their classes both abroad and in Buenos Aires (where their classes are well-attended by aspiring local professionals), but they do not use the term. In December 2009, in an interview in the international bilingual tango magazine El Tangauta, an important tango professional widely associated with Nuevo, Chicho Frúmboli, repudiated his role in popularizing it (read the interview). However his wide range of dance expression still includes the kinds of motions that some people find offensive. (Chicho dancing “traditionally” at Sunderland and “nuevo” at Practica X – source of the photos in this post.)

Another informative example is the children of Gustavo Naveira, undisputed cofounder of Nuevo Tango. Federico and Ariadna Naveira are current darlings of the international festival circuit. Their dancing might appear to some as traditional, yet the follower’s foot certainly leaves the floor. While they would not describe themselves as Nuevo, they perform regularly at Practica X and did when nuevo tango music was still played there. Typical of young Porteno stars, they are also invited to perform at traditional milongas. (With her partner Federico, Ariadna dancing at El Motivo in 2011.  With Federico and Ines at Practica X in 2010 a few tricks but mostly very traditional dancing — I am sitting in the back left corner.)

Indeed, a visitor to Buenos Aires could not today distinguish between traditional and new milongas based on the music played, the embrace used, which orchestras are invited to play, or which dancers are invited to perform. What is different is the age group of dancers, and whether the tables are hosted and segregated.  A punctilious person posted a fascinating comparison of Practica X and Viejo Correo in 2010. (The only thing I would disagree with, and I was there at the time these posts were written, is that the cabeceo is in fact used at Practica X, El Motivo, and everywhere else in that milieu.)

My position, which I will state here since I have written this post for my students and community and I suspect you will want to know: 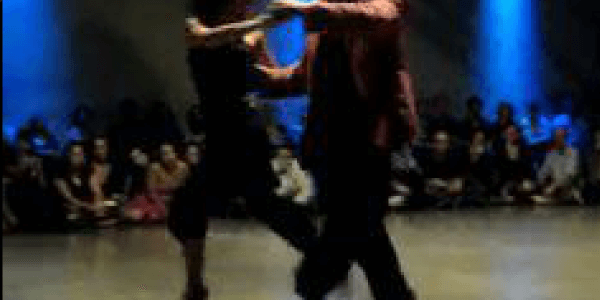 For slight updates to this post, please see my October 2011 report from Buenos Aires.

Also see a more recent post, Nuevo Tango Reloaded. And a third resource, Tango Nuevo, a term coined by Petróleo in the 1940s…, my summary of Carolyn Merritt’s excellent dissertation on the subject.