The significance of Berlin to Tango: Interview with DJ Michael Rühl, Roter Salon

The beginning was Juan Dietrich Lange, from Uruguay, 33 years ago (1982)…Two years later, I started…

In the beginning we danced something with tango figures. I don’t know if it was tango. But then after we understood there’s more than only tango figures. It’s more the embrace. Being close together with another person to dane this beautiful music. One of the teachers who taught this was Eduardo Arquimbau and Gloria. They began to talk about milonguero style in the end of the 1980s…Gustavo Naveira was often in Berlin 88, 89. 90, up to 97, he came every year… 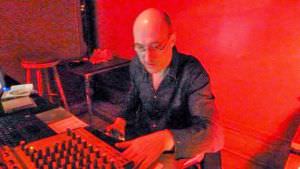 I make events since 29 years. My first was in 1987 with three couples performing and one orquestra and I was the DJ and I sold drinks and had much to do. I was very nervous. I organized and I was also an artist…

I began the Roter Salon milonga in 1993. In that time we had every week 3 milongas, not more. Now we have on this night, Wednesday, 5 milongas.

It’s not the tango scene of 25 years ago, when 90% were German people and half were from Berlin. Now you can say that 50% are Germans. And maybe 10% from Berlin. People who then were interested to go to Berlin are now Berliners. Maybe those people who are reading this now will be tomorrow Berliners.

I am often astonished who is having success. I am thinking a milonga needs a beautiful room, with beautiful floor, with good sound equipment, good air, enough seats, and so on. If you look who is having the most success, many people go to milongas which have nothing of this. Maybe the DJ is bad also. You can find milongas with all those things and you can see no one, or only a few dancers.What are people looking for when they go out? They go to rooms which have nothing. I think the most important thing of the milonga are the people, maybe beautiful women, maybe young people. They want to meet other people they are interested in. You can make it more beautiful but will not come more young people…

Then Berlin is one city with long history of tango. More than 30 years people are dancing, and many generations of tango dancers are here. I danced 30 years. I have a friend who is dancing since one year. So you have different kind of styles, points of views, people with different teachers. Many old dancers had teachers who are now dead. I had more teachers who died than teachers who are still living. I had some teachers who have now 100 years. If you go to Warsaw, Poland, people began to dance 10 years ago. They began in a different time.

Berlin is a big scene of tango, with many different tango people. If you come here you can see what is fashion. But there are many other things. On facebook it seems there are 5000 tango dancers in Berlin. But there are 100,000 tango dancers in Berlin. I have taught 25,000 people over the years. So I can say maybe in Berlin you have 100,000 dancers. If you go to the fashion milongas you can see people are making this, saying this, teaching this. But it’s only a little part of the tango of Berlin. It’s like in Buenos Aires as you go to La Viruta and you see what people are doing there. But if you go to other milongas you see something completely different. It’s the same in Berlin, open your eyes and you can see many things.

What I don’t like so much is if I go out and I hear always the same music. Tango produced enough music that you can make fifty years always interesting tandas. Now many DJs are using bad quality mp3 copies, really bad sound. I bought 8000 vinyl discs in BsAs and I digitized some. But I also bought CDs in Argentina and Japan, which have better quality. There is so much music you can use, but you have to look for it. It’s not so easy. Today it’s very easy to get 10,000 tangos from a friend, but half you cannot play because it’s bad quality in mp3 format. A DJ has to work a little bit.

I would like to see that the good dancers, teachers, and DJs are more visible. And those who don’t know so much and making good promotion, are seen like good promotion people and not as anything else. I want that people who make good things are more seen by new people.

Berlin is famous for the boheme life. People come here to go out, to meet people, to laugh and love with them. And tango is a part of this. It was always. Also in the 1920s. Why people danced tango in the 1920s, so romantic. And also something sentimental, the feeling of the soul, to make expression. To share this with a dance partner, and with other people. I dance with someone in my arms, close to my body. Many tangos have sad feelings. This feeling I share with someone who is very close. For some minutes. Then we go on. In a big city, you go out find many different people and you have histories that are very short. In a disco also, you meet someone, dance 5 minutes and never see them again. In tango it can be the same.