I first found Orquesta Tipica Ciudad Baigón in the streets of Buenos Aires San Telmo in 2008. In 2017 I found them again in a Berlin Squat called Supamolly.

I met Ignacio in the hallway after a remarkable musical experience, and he agreed to an interview.

Ignacio learned that in English, the Orquesta’s name is a perhaps more typical tango reference to a “bygone city”.

The Orquesta was founded in 2007, by the pianist Hernán Cabrera, the contrasbassist German ______, Bandoneónista Nicolas _____ and Violist Gabriel _____ .
Ignacio joined in 2009. “Before, I played guitar. I was in a classical tango orquesta. We were always searching for a bandoneónist. Finally I decided to play. I didn’t have a great history of a grandfather playing bandoneón.”

The Orquesta is 14 people including the sound and light technicians. 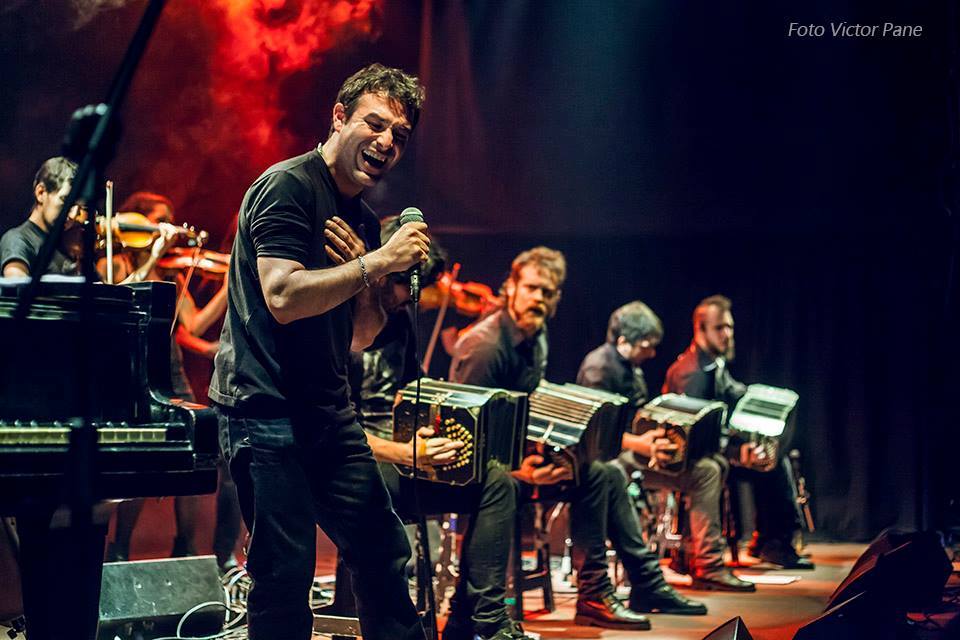 “It’s very difficult now in Buenos Aires to have a whole Orquesta, difficult for money, and for time. The idea of an Orquesta is dead in Buenos Aires. But the sound is unique. You can’t create it with a smaller group.

“Our first disk is all classsics and one new song, “Permiso”, but our idea was always to compose new tangos. The second and third disks are all our own, new music.

“In Buenos Aires, there are very few dancers dancing on new tango music. It’s easier for them to dance on the old songs that they already know. I worry that some musicians play tango for dancing as work, not art.  Many of musicians in the orquestas who play old songs for milongas also play new tango music in other orquestas, but it’s easier to make money playing old songs. Our violinists also play in classical music orquestas, their day job is classical music, and at night tango.

There are also places and audiences for listening to new tangos. In a concert the orquesta can attract people to listen, but only 3 or 4 milongas in which you can play new tango music and the people will dance. I feel that bit by bit, every year the dancers open more.

In Europe, the people have more open minds for listening and dancing. The people here want to dance and they are more open to all music. They dance on Chopin, Rock, folkloric. The important thing to them is dancing.

But it’s very difficult and expensive for us to travel with 14 people! We sometimes can’t afford to accept the invitations we receive.

On our first tour, we only paid the cost, but this time we we will make some money. But for us, for all the musicians, the most important thing is to play!

We want to grow and create. It’s important to travel to meet people, this inspires new music. We make a tour every two years. In Europe we have the opportunity to play for 600 people. In Buenos Aires this doesn’t happen. We play in our own place, “Galpon B”. It’s a concert place for rock and other music, but the regulations for dancing make it difficult to invite dancers. We play there twice a month, on the first and third Thursdays.

Now I play with four different groups, with more or less fusion.”  Two of these orquestas, Ciudad Baigón and Alto Bondi don’t play milongas, only concerts and independent festivals.  What is important for us is to make a show, with light and good sound. In milongas it’s acoustic and without any staging. No piano. It’s not a good condition for making a good show.

In Buenos Aires, our show is one hour. In Europe we play two hours. Ciudad Baigón is dark, powerful, climax and tension all the time, with nice melody of violin, with elements of classical music and rock.

It’s not school conservatory music. It’s more an explosion, movement, dancing with the instruments, party, the night, beer. Alto Bondi is ‘Rocker-style’, with electric guitar and pedals and composition, a fusion with rock and candombé, but not electronics. Dark. The important thing is to create a good music, music that I like and that my friends like. In Alto Bondi, all the five musicians compose. I love rhythm and changes of rhythm.

Tango is Latin American rhythms with European instruments. And Tango is the voice of Buenos Aires … The old tango was the old Porteño speech, very fast, different from other parts of Argentina. Tango was played very fast. D’arienzo was for that time, for yesterday. Then came a time with more tension, this was the ultimate point of Pugliese, the voice for now.

Rock musicians have a choice to play old songs too – or they can play new songs. Queen tributes are great, but I prefer new music.

For me, it’s tango. It’s the tango of these days. Ciudad Baigón and other groups form the new tango music of Buenos Aires.

The old musicians are dead. Our generation is the new tango. 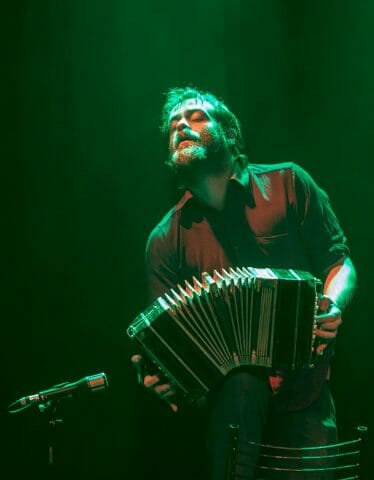