As many people are noticing and manifesting these days, crisis does not mean disaster, it means change and opportunity.

Now that the malls have their tractor beams running again, and shoplust has retaken loneliness as the leading mental health disorder, this “crisis” becomes precious. I’m not ready to go out. I’m taking my time. First, I want to document what I’ve learned and keep track of what there still is to do.

There are a few things things that I’ve been trying to work on for many years, with no progress: gentleness with myself, living in a sense of gratitude, and forgiveness for the 2 really tragic mistakes I made in my life. Unlike the other things I do, gentleness, gratitude, and forgiveness have proven impervious to my will, uncooperative with my weekly planner, and terribly slow for a person reputed as “built for speed”. Knowing better, I could only observe the seething self-violence, the persistent disappointment, and the cringe of remorse.

There turned out to be a powerful medicine in STOPPING.

On March 13, the ship docked in Honolulu. I was to fly out that evening for the next stop on The Plan. All around me, people reconfigured to uncertainty, some forging determined and others surrendering to the unknown. Speculation was gusting around, emotions were being repressed, and bursting out.

I had to pack. I concentrated on that.

I went out to get my cell phone repaired. That seemed important. I was standing in B Patisserie, Honolulu, waiting a very long time for a coffee. That long wait turned into what is known as “bullet time” (first used in the Matrix, and then designed into the X-Men character, Quicksilver – clips below).

BulletTime gave me time to look in every direction. I realized I didn’t have to get on that airplane. And I realized there were at least four paths. I don’t have to go forward. I could go back. Or I could stay here. The barista called my name. I carried my cup outside to the table. The only thing that matters now is choosing one of those four path

The path I chose was at that time the least comfortable, the most unknown, the scariest. But that’s not why I chose it. In fact I don’t entirely know why I chose it. It was a moment of grace, of allowing myself to be guided by wisdom I don’t understand. My best guess is that in BulletTime I had sensed a wisp of Stopping. I had been on the run since the 6th of November – or since 2009. Staying in Hawai’i involved the least movement – just a short plane ride from Oahu to some sort of safehouse in Maui.

The next few hours, in which I implemented my decision, were drenched in fear. What had I done? But I knew that my fear was part of the fractal unfurling across our planet, identical in its most mundane and momentous iterations.

I went to a different airport, at a different time, with no ticket. A radiant, kind Pacific Island lady assured me that there were plenty of tickets for the first flight in the morning, and Southwest Airlines doesn’t charge luggage fees. I bought the ticket and started to maneuver my suitcase toward the airport lounge. It was my style – minimalist 1970s, unrenovated.  It was outdoor. The air was perfect. The chairs were great. The airport was deserted. I felt embraced. Slowly tugging my 5 months of luggage across the airport, it was as if I walked out of my skin. I hardly recognized the emotional being who arrived to that bench. I felt totally overwhelmed with gratitude. A beautiful waterfall of gratitude cascaded on me, and has flowed and flowed through this time.

Then I sat down and faced the next 14 hours. It was not possible to go to the boarding area so long before a flight, so I had to stay in the outdoor part of the airport, where there were no shops. I had a few cookies. I had aiport wifi. I had a fully-charged powerbank for my partly-functioning phone. I did not have a US electrical converter. That meant I couldn’t entertain myself by working on my computer, and that I would run out of all power well before morning. I was afraid of the cops clearing the airport. I was afraid of my stuff getting stolen if I slept. I decided that if writing is what has kept me alive so far, it would get me through the night. I opened a clean page in my notebook and I started, deliberately in uncharacteristically concentrated printing, to explain how I had got from Zürich to Honolulu. I was grateful for the ink on the page.

A few hours later the cops did come along. They explained that for people who had morning tickets there was a special security area where we could safely sleep. It was outdoors but well-sheltered. There were guards. There was a reasonable lighting situation for sleeping. I woke up warm, to the smell of rain.

On Maui I found 12 perfect square meters where I have continued Stopping.

I haven’t stopped working. I wrote a book that I’ve been preparing for 10 years. Made the Muscle.Fashion.Imagination exercise series. Built a website for my host, and one for my next project. Renovated all of my other websites.

What has Stopped is working for free, Making Things Happen with no budget. Disappointment. Disregard.

When disappointment stopped, drinking stopped. It was a lurching surprise. I had just bought a case of California Cabernet to get through the lockdown. Startled, as if someone had punched the brakes too hard, I realized that the craving was missing in action. Less dramatically, coffee and sugar have slowly (not entirely) loosened their grip. I still use them, but I don’t need as much.

Then came the directive, Take Care of Things (including me). This seems obvious and mundane, but these are the things I never had time for when I was Making Things Happen. Here’s a partial list:

Taking Care of Things is about Taking Responsibility, instead of being Overwhelmed or Helpless. Some years ago I started to notice that Helpless gets very expensive. I tried to recognize it and interrupt it, but I only caught the bigger cases. When it came to things like finding time to learn how to use cameras, or fixing the TangoForge UX, or organizing photographs so that I can find and use them when I need them … urgency gave me an excuse. But now I find it’s not just a matter of tasks that impose themselves with urgency. It’s a quality of life issue. It’s a quality of work issue. It’s about bringing quality to everything I do, which makes it all more pleasurable and more powerful.

For example, I’ve redesigned the buttons on TangoForge. Now that was never going to be urgent. And it was beyond my technical capacities until two weeks ago. And it’s still not working perfectly because I’ve got light and dark backgrounds and it’s hard to design one button that looks perfect on both, so I’m still tracking down and customizing each one that doesn’t look good.  But now every time I test a button, I feel pleasure and pride. When I accept responsibility for the quality of everything we touch, I am the biggest beneficiary, because those reflect my agency and artistry constantly. So taking more responsibility for overwhelming things not only reduces stress but increases the richness of life. My new rule is “research, don’t abdicate.”

The Distance has been an aperture to many changes. Some intentional, some incidental.

Some little, some big.

A little one is that I’ve added Stretching to my morning creative coffee time. For the last 10 years this has been the most important part of the day. With a blank notebook page, a good pen, and an optimistic drug I clarify my intentions and bathe any problems before me in the light of desire. I always do this with the best view available. Here, that’s the ocean, but there’s a glass wind-barrier around the balcón, and if one sits in a chair, then the view is through the inevitably salt-stained glass. So I stand, which at first induced impatience, rather than contemplation. Until I discovered Stretching. Of course stretching is already a big part of my life, but not during contemplation. And the railing is high, which means I start the day with big Stretches. And that now feels like the way things should be done.

A big one is that, unexpectedly, things related to my beloved, hard-won Berlin flat evolved in such a way that I decided to let it go. The Festung Absicht was a fortress protecting bold intentions, in which we shot a lot of the video for the Digital School, housed and trained the crews for our CTF performances and the WARRIOR film, and hosted many visiting dancers. By the dawn of 2020 it was clear to me that TangoForge and Vio y Roberto have accomplished what we wanted to in Berlin. Our goals are no longer focused there and I don’t need or want to live there any more. I decided to let go of that beautiful flat. With Roberto and a few other friends’ very hard work, my things have been stored.

On the same day the flat was legally released, Italy opened its external borders. Italy is where I’ve wanted to be and have waited too long to get there, distracted by art and love and work. Roberto and I have had great fun together there, enjoying the architecture and the food. I anticipate returning to Europe in mid-July and will spend the next months searching for a new home.

What remains on the to-do list is something we dancers all share, and must keep in focus over the next months as we re-engage familiar life. The Action Item is deciding how we want to re-engage tango. I believe more than ever that it’s necessary to Stop participating in aspects of tango that hurt us and Stretch toward unseen paths that evoke gratitude rather than disappointment. We need to decide to Take Care of ourselves and others. To take what is nourishing from tango and not fall back into cycles of addiction.

Here is the sunrise I woke to on the day I let go of the Festung. 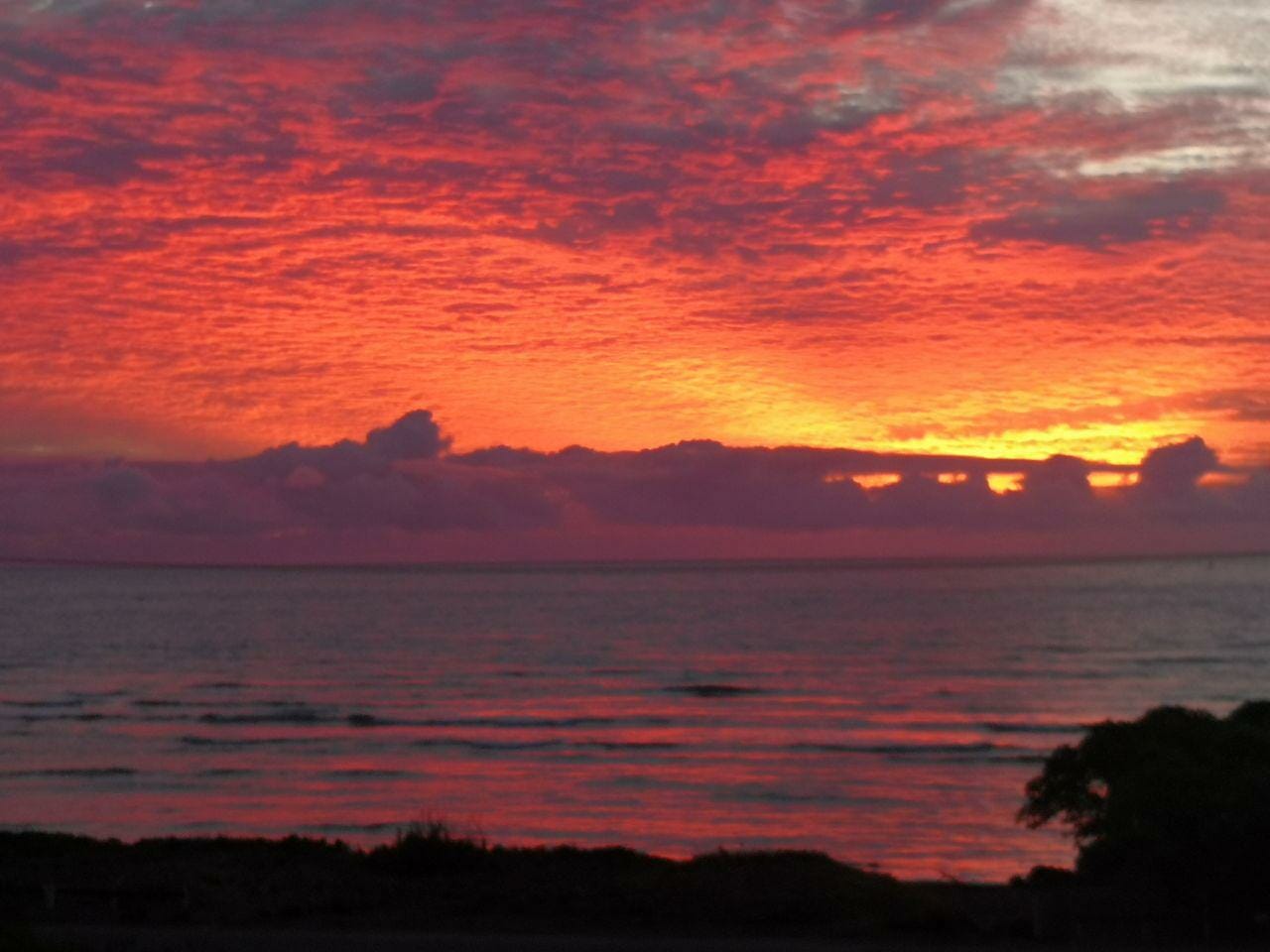