Shhh! A secret for men! 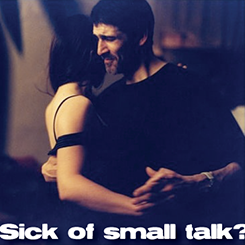 This is a post I don’t want to write, but I’m forcing myself to do so.

I don’t want to write it because I think people are generally beautiful, and as I get to know someone, they start to shine in my eyes. Before long I am awestruck with their beauty, and because of this I tend to fall a little in love with everyone.

That’s my truth, but this post is about something else. In this post I’m trying to be objective, to share with you the cold hard facts of tango.

Men who don’t turn heads on the street are hot stuff in the tango world, and will have a large selection of women to choose from if they want to date or find a girlfriend.

There, I’ve said it.

I can’t tell you how many times this has happened to me. A guy asks me to dance who is — can I just say “not at all my type”. I like short, lean guys with cheekbones, and generally not blondes. This guy’s a little too tall, he’s not slim, has a full face, and bright blonde hair. Plus he has that too-eager look which means he might not be a good dancer and is generally un-cool. Oh, and he’s sweaty. It’s not promising, but I like the song that’s playing so i deign to accept the dance. Less than two minutes later I am having such an intense experience with him that I have the perception we are in love. I have thought, “well I guess he’s my boyfriend now.” This is without having spoken one word to each other. The hallucination is put to rest when he sweetly thanks me for the dance 9 minutes later and walks away from me to another woman, but he can have me anytime he wants me because I believe we shared something special.

I’ve had this experience many times. Many many many more times than I have looked around a tango room and thought “there’s a handsome guy”. The hotties in tango are hot because of their dancing. They are almost never guys I would look at otherwise.

Want proof? Check out this American tango couple. This is Nick Jones and his new wife, Diana Cruz.

Many of them are portly. If you are heavyset but agile, tango is for you, because your mass makes tango easier.

And I’ve only discussed my tango crushes. I’ve also had the chance to observe so many ordinary guys become extraordinarily hot and desired as they become good dancers. The women simper and flirt and offer themselves. I am not exaggerating.

So what’s the magic? See my post on tango and masculinity…

You know sometimes you’re sitting in a restaurant looking at a couple, beautiful girl with ordinary or not-so-attractive or much-older-than-her guy. And you’re thinking “why is she with him?” And then you watch them get up and leave the restaurant and you realize that was his Ferrari parked out front. And then you say “oh, right, women are attracted to money, not just looks.” Tango is the same, only you get lots of women.

But it’s not dancing tango that will get you this attention. It’s being good at it. Some people say this takes years. It really depends how serious you are. I’ve seen guys get to this point in less than a year.

All the posts about masculinity.

Do you want to start dancing?The first few steps are the hardest.

I’ve written a guide to get you

from this screen to your first Tangos…

Just enter your email and I’ll send you the guide.