My Mate World carries many varieties of organic yerba mate, and can send you a sample kit so you can try them!

Why do I drink yerba mate?: Because it’s a smoother high than coffee, and it generates physical power AND excited ideas! 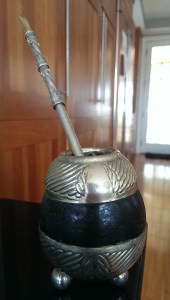 Yerba mate contains 24 vitamins and minerals, 15 amino acids, and 11 polyphenols, a group of phytochemicals which act as powerful antioxidants.  Polyphenols are considered to exhibit anticancer effects in mammals by strengthening an organism’s natural defenses and protecting it against cellular destruction.

Nicknamed the “liquid vegetable,” yerba mate has 196 volatile (or active) chemical compounds found in the yerba mate plant – of which 144 are also found in green tea.   In addition to polyphenols, yerba mate leaves contain saponins. Saponins are phytochemicals that have been found to specifically stimulate the immune system and aid the body in protecting against disease. In fact, one study yielded three new saponins in the yerba mate leaf.  These “natural detergent” compounds (glycosides) are found in a wide variety of plant life, which bind with cholesterol so it cannot be reabsorbed into the system and is excreted from the body.   Yerba mate is high in chlorophyll which helps reduce the binding of carcinogens to DNA in the liver and other organs. It also breaks down calcium-oxalate stones (better known as kidney stones) and can boast higher polyphenol and antioxidant counts than either green or black teas.

Yerba Mate contains three xanthines: caffeine, theobromine and theophylline, the main one being caffeine. Caffeine content varies between 0.7% and 1.7% of dry weight (compared with 0.4– 0.9% for tea leaves, 2.5–7.6% in guarana, and up to 3.2% for ground coffee); theobromine content varies from 0.3% to 0.9%; theophylline is present in small quantities, or can be completely absent. A substance previously called “mateine” is a synonym for caffeine (like theine and guaranine).
Dried yerba mate tea contains around 1% available caffeine (ranging from 0.5-2%) when made into a tea with warm to hot water. Hot water appears to provide very good solubility for the caffeine and theobromine, although ethanol (alcohol) and super critical carbon dioxide have been investigated for commercial production of extracts. Boiling water reportedly extracts slightly (5-10%) more caffeine than cold or hot water steeping. It is said that boiled yerba mate tea is less pleasant tasting which may be the result of additional materials such as tannins and oils being extracted from the leaves in addition to caffeine. Remember yerba mate is not coffee, and it’s not just caffeine. It´s a very nutritious beverage that can give you a pleasant morning jolt without coffee’s jitters.

Researchers at the Free Hygienic Institute of Homburg, Germany, concluded that even if there were caffeine in yerba mate, the amount would be so tiny that it would take 100 tea bags of maté in a six ounce cup of water to equal the caffeine in a six ounce serving of regular coffee.

Visit My Mate World to learn more, order organic yerba, or even a kit with yerba, mate, and bombilla…