“The Borders are why you Stay” interview with Brigitta Winkler, PHYNIXtanzt and TangoMujer

The initial spark was the Horizonte Festival in the Künstlerhaus in Mariannenstraße in Kreuzberg in 1982. They had Latin American cultures and they invited an Argentine group who used to live in Paris, Alejandra Sedano and Coco Orlando Días, together with a live band. That was the first time that I saw tango. Jaun Dietrich Lange was there as well. Later there was a fight between Lange and us because he said how could it happen with two women. He’s not doing that now anymore. He’s very good with us.

After that show I was mesmerized – “What is it that you’re doing?” Two weeks later I was in Paris and I started working with them. I was already a dancer but not tango.

I was wearing Birkenstocks and I would never wear heels. It was important for me to find out what does it mean to be a woman. I was attracted to the tango to make a strength out of that. I wanted to find out more about what it means to be a woman to me, on a personal level. I still am a feminist. For me personally it was like playing with all the facets of what it could be to be a woman. And going into that feminine side with my heels. After a while I practiced in Paris and he would teaches classes here, to me and my girlfriend, Angelika Fischer. 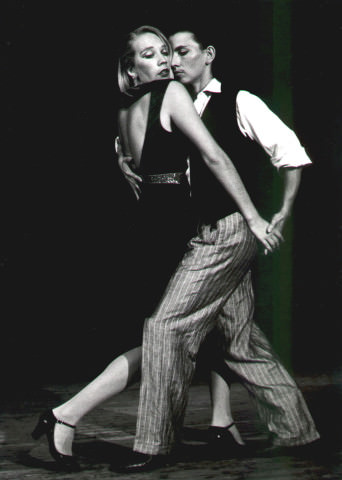 There was never a question why shouldn’t we dance together. It sounds strange but we were unaware that it would be a problem somewhere else in the world.

We brought Eduardo Arquimbo here in the 1980s. He would say “Berlin is strange…leche sin leche…” (soy milk), he would add all these things, and there is “tango sin hombre”. Imagine that there exists a tango without the guys. How can that happen?

In Argentine in the early 1980s we were invited to do shows. They’re from Europe, they have hair under their arms. In shows we we danced for demos in the milongas and the TV invited us. But we couldn’t dance socially in the milongas. It was ok as an art form, this strange thing that comes from Europe, but never in their milongas. They would not allow two women to dance together in milongas in Argentina in the 1980s.

I moved to NY in the early 1990s. In the late 1980s and early 1990s I was there, and I started dancing with women. They would say “no it’s not allowed in New York.” And Miriam Larici said “tango is a man and a woman. It’s not tango with women.”

If we had looked for it there were no men. There was Juan Lange who said you can’t do that. He was going to make a studio. He had the idea “I have the blood, and those are just two girls.” I opened Phenixtanz with Angelika in 1986. And for 30 years I lived from tango, and Angelika too.

I made dance theater in a group called Tango Mujer was in the 1990s. Six women, leading and following and telling stories, whatever we thought was important. We won a grant and toured all over the USA.

All through this time I was dancing a lot with Argentines and had Argentine dance partners. And Coco Díaz invited me to do a show with him.

The borders are the reasons why you stay. It’s not acceptable. It’s political and philosophical. This is not ok. It can’t be like that. So you have to work it out. It’s something I love anyway, and because I love it, I have to fight more. I love men as well and I love dancing with men. I have lots of men partners. I like to have the freedom to choose with whom I want to dance. I’m sad that I’m not doing it in Russia. It’s very sad.

It’s always changing. Tango is perfect for that. It’s a mirror or playground for whatever is coming up with you in your life, or whatever you need. It shows you what you need to work on, where your problems are or where you’re stuck. That’s where you have to work with it. There’s the possibility to work it out with and through tango.

It’s true I was one of the first ones here and I have a lot of experience, 34 years of tango. I am not so interested in the history. I think the history serves for the experience you have. You collect experience. What is interesting is what do I do with all of that now. Since the future is not written, what matters is what you do with it.

Berlin is really stuck and saturated. Even with the dance. Of course too many teachers. Even too many events. That’s what I do sometimes here in Berlin, less. Do they need me here? Berlin needs less, so that it’s again appreciated what’s going to happen.

What makes Berlin special. It’s here for a long long time. I’m here since the beginning of the tango. It was never a problem. Berlin created its own tango. Also with this thing we did not play tandas. We don’t need to do it like Argentina

When I travel I find really good dancers and people who care and study but have never been in Buenos Aires. It happens more and more. It’s ok to give yourself permission to be authentic. It means you are who you are. I’m not an Argentine.

What helps with Berlin is the long experience, the long tradition. It’s 35 years ago. Nowhere else. Not in New York. So that gives us our own roots. Why could it root here and not somewhere else? That is because of the specific and unique situation Berlin had as this island in nowhere land. All the laws were different than somewhere else. I came here because of that. There were no young people, everything was empty, you could occupy the houses, you could have lots of dance space. I could not have opened a dance studio in any other city than Germany in 1986. The city was empty. Tango was blossoming here, a big point in the pre-punk culture. We were dancing tango up and down the street in our punk outfits in the early 1980s.