Well it was a pretty big night.

First of all,  the level was very nice.  The tendency to jerkiness which has characterised most qt events I’ve seen to date has been overcome.  People danced with nice connection.  I am thrilled about this.

Second,  the number and level of women leaders is now significant.  Still more men,  but the gap has decreased to a more tolerable level since the qt fest BsAs of 2009. There were two butch Bois leading like [Marathon] men (with hip flexión!!! )

Third it was of course great that the community organisers who have been working for a long time in BsAs were here,  including Soledad,  who performed tonight.

Fourth, there was less mixing of genders in couples. At the start of queer tango, people needed to dance with whoever was available, and they were very generous about this. Many times gay students say “I don’t care who I dance with, I just want to dance!” Now that there are more dancers at all levels, gay folks can find someone of their preferred gender and appropriate level.

Fifth,  I had a great and interesting night.  The power on the dance floor,  and the positive attention of the onlookers raised my game. Aurélie and I danced three tandas in the crowded time and I enjoyed being creative with the space available.  Then later when there was space we went out for a Pugliese tanda and there was so much power coursing through us we could barely keep the dance under control. We kicked ass,  despite getting tangled in one another’s pants and a bit of slip-n-slide on the floor.

It was hot enough that dancers were dripping streams of sweat on each other.  We took a break.

Then came a tanda of Morgado milongas.  I wanted to try  and she was willing.  I managed to mark this beloved music in a satisfying way for the first time.

And as if all that weren’t enough,  I got some new experiences: admiring eyes on me as I came off the dance floor,  my responsive swagger,  the draw of girls’ desire,  and for the first time the urge to be tender with a revel.

I think because I knew I was receiving romantic feelings,  even though  -or perhaps because- I was not attracted to those particular girls,  I felt compassionate.  Instead of leading whatever I want and demanding that they struggle,  I got into close embrace and danced romantically.  At the end of tandas two of them impulsively kissed me on the cheek.  In them I recognized the charmed, open,  vulnerable,  loving creature who emerges from a moving tanda with a romantic object.  Very very very different from girls who dance with me because there aren’t any men,  or because it’s good practice.

Did I mention that it was so beautiful to see people in such intense pleasure? 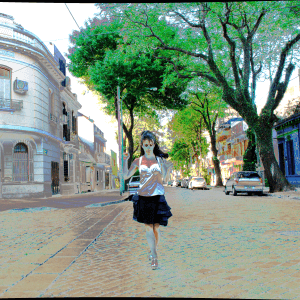