My last Queer Tango Festival was Buenos Aires in 2009. The global scene has advanced in several dimensions: 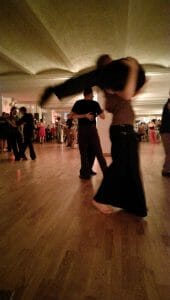 Why is queer tango so great?

Not so much the composition of the couple,  or the exchange of roles.  What stands out is how people feel about the whole thing.

In my queer tango classes,  when a pair makes a mistake they giggle and hug.  Hetero tango students do not.

When people crash on the dance floor at a queer milonga,  they smile at each other as if to say “Wow,  isn’t it awesome! We’re dancing!!!!!”

When people are sitting at the milonga,  there is no air of hunger or expectation.  If they really want to dance,  they can because most people dance both roles. That’s the biggest thing. No hungry women.

But the biggest difference is what it’s like to watch the men, which I can’t get enough of.  Everything we say about tango –   that the dancers are fully present,  that they are lost in the connection,  that they experience timeless ecstasy…   These things are true,  not ubiquitous.  But the men of queer tango occupy that place.  They appear consumed in the sweetest bliss,  and it’s visible not only in their faces,  but in the efforts of their bodies.  There is no passivity and dependence in the movement,  and less authority too.

I have to say that the girls are not in the same place.  They look like they’re working hard,  which is what women tend to do.

One thing I’ve noticed about queer tango is that men and women are not on the same path.  I sense ambition.  I do not think women will be satisfied for long with a hot hug.  I predict women’s tango will stretch us,  and tango.

I had some idea about what I would learn on this trip.  Predictably it is different.  I am learning something about the construction of desire.

There are a covey of queer fest girls wearing prim frocks: v-neck, plain fabric,  belt at the waist.  They never smile.  They are some of the better dancers.  I am not attracted.  Then there are girls showing a lot of cleavage.  This I don’t like at all.  When left to my own devices I chose two revels, both femmes in wide-legged pants and tango sexy tops,  but no cleavage. One was Ekaterina.

After I cabeceod them,  I expected to mark but they had other ideas.  I did insist on marking the first song,  but then yielded later.  Both turned out to better marks than revels,  and the experience was nicer with me revelling,  so I relented.

If I feel the communication and level is excellent,  I’m happy to change roles while dancing,  but only if it feels interesting and artistic,  not for the sake of it.  I’ve danced with one person I feel this way about.

When I first started to notice that I seem more particular with the girls I thought I was discriminating in some way.  It’s some kind of sexism, objectification. But on further reflection I recognized that it’s just that men are all the same.  Most tango guys are not cute at all and they wear boring clothes so there’s not much choice. Moreover, I am accustomed to press my body against any man.  I don’t evaluate.  If I were to dance only with men who attract me,  I would dance one tanda a month. With women there’s a lot more options.

But queer tango is again somehow different.  Without the desperation  and the dichotomy it becomes a field of desire.  Floating through the crossfire of the gay guys’ flirtation, I cannot evade the question of desire. I look for my own,  and it is certainly no more just to dance.  I want to want the dance.  I want to find something with my partner,  something more than what we are looking for.  I need to use my senses.

When I allow myself to articulate it,  I know my desires already.

If a boy is tall and skinny I want to mark him in open embrace with full force.  If he is stocky,  I want to revel.

The image I cultivate as a revel is not the image of the girl I want to mark.  My image as a revel is a signal to the man who can appreciate elegance,  who can tell the difference between high style and and smut.  Most can’t tell one short skirt from another.  And I never really know if a man appreciates what I want him to,  but at least I offer.

To my surprise, the girl I want to mark is not like my own femme. She is not butch either (or if she is I want her to do the marking). I am totally unattracted to girls wearing high heels. My revel wears sneakers, showing that she’s ready to move. She is neither delicately built nor primly dressed. She is not busty. She is not wearing patterns. She wears simple dark colours. Her jewelery and hair will stay out of my face. 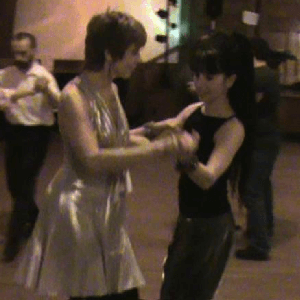 Vio is part of the international movement to Queer Argentine Tango by encouraging gender complexity and exploration and creating space for GLBT people to enjoy tango. She is the founder of of Queer Tango Boston and Queer Tango Wellington. Her students now run their own weekly practicas and classes as community organizations. Vio is committed to building and supporting Queer Tango everywhere and, through her school TangoForge, to liberatory teaching methods. She is the co-author of Aleph Bravo Tango, a novel about Argentine Tango which, among other things, encourages readers to imagine a Queerer Tango. The novel was published in 2009 and is available on Amazon and other online booksellers.